This is the AES Blog, where we regularly post articles by the Australasian evaluation community on the subjects that matter to us. If you have an idea, please contact us at . Blog guidelines can be found here.

Welcome to the AES Blog

Australasia has some excellent evaluators. More than that, we have an evaluation community full of ideas and a willingness to share. The AES has long provided a place for us to come together, at regional events and the annual conference, to develop our community together. Now we’re taking it online! The new AES blog will be a space for AES members – both new and experienced – to share their perspectives, reflecting on their theory... If you have an idea, please contact us on . Please also view our blog guidelines.

Anona Armstrong: The founder of the AES 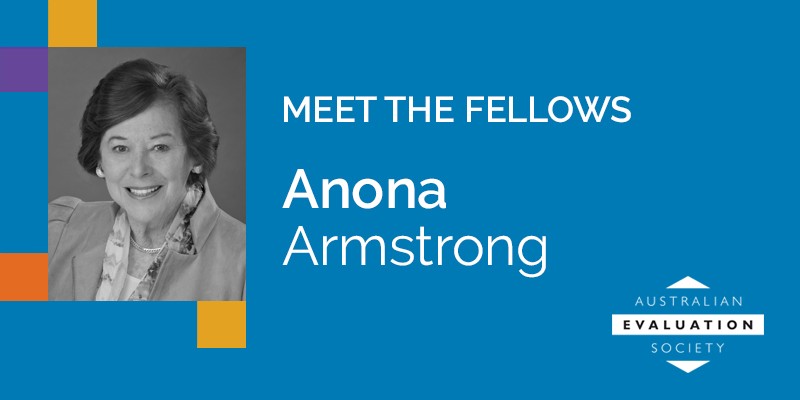 Although a number of AES members have founded consultancies to channel their evaluation work, it is another thing to think about – and actually achieve – the founding of a professional society. This is exactly what Emeritus Professor Anona Armstrong did. Through her company Evaluation Training & Services, the fledging society was born in the early 80s. Not only did Anona found the AES, she had the honour and distinction of having a piece of music written for her and performed at the AES International Conference in 1992.

Unfortunately, I wasn’t able to interview Anona in person, but I am very aware of her achievements – Anona and I go back a long way! Though I know some of the earlier history of the society, it was important to get an accurate record, so the first question on our string of emails was:

Forming a society is no mean feat…how did it happen?

I guess I sort of anticipated her answer (something on the lines of ’well…Rome wasn’t built in a day’).

Anona also acknowledged that the growth in the membership of the AES was due “in no small way to formal teaching but also to evaluation training provided by AES members.”

Like many evaluators, I was curious about how others began their careers, particularly in the ‘80s when evaluation was still a fledging field in Australia.

So how did you get into evaluation?

Anona was referring to her foray into impact assessment, when she realised that there were no accepted measures. So she looked into the ‘new’ research on social indicators, which gave her the “foundation for measuring impact as well as performance management in the public sector.” It’s no less than what I would expect from someone who founded the AES.

As an evaluator I was also curious about Anona’s thoughts on some of the early writers who influenced the field of evaluation in Australia.

I was not disappointed – I got a valuable history lesson on her take on the assent of evaluation in this country.

As a practitioner who has been in the evaluation game for a long time, I was very keen to get Anona’s thoughts on the changes she had seen in the field of evaluation.

Another area I was keen to get Anona’s input were skills that evaluators need now.

In her speech to the Australasian Evaluation Society International Conference in 2015 on the future of evaluation, Anona expanded on this theme.

Anona then went on from the original question on what skills are needed to what could be the role of evaluators in the present day.

I then took this question further and asked about the areas in which evaluators and the field of evaluation could make a difference.

Anona suggested five directions in which evaluators could have a major impact:

Now is the time to extend the focus of our activities and use our skills to address some of the larger social issues. Evaluators have a role in establishing the value to society, and to organisations, of actions that count as corporate social responsibility and sustainability. While sustainability has different meanings in different contexts, there is a need for measures that allow comparability at least between entities engaged in the same industry or service.

Evaluators have traditionally used social science methods to determine the worth of programs. The debate over qualitative versus quantitative methodologies is surely over. We need the different data provided by both methodologies. The new debate is probably about social science methods versus financial methods. Value for money is becoming a standard component of evaluation. Whether in health, education or social services, it is time that evaluators addressed the reality that financial decisions drive governments as much as political ones and answering financial questions requires financial analysis.

Evaluators need to take advantage of new data mining and other IT systems that are powerful tools for analysis and communication. This means adding financial analysis, modelling and data mining to the evaluator’s competency frameworks.

Across the world, there is a greater emphasis on best practice governance. Corporate governance is defined as the overarching framework of rules, relationships and processes within and by which authority is exercised and controlled in order to achieve objectives. Standards for governance are now issued by governments and professional associations. In the higher education system, universities must meet the governance standards, set by TESQA, called the Threshold standards.

Trade agreements with New Zealand, several of the 10 ASEAN countries, India, South Korea and China, etc. are opening up new avenues for Australian trade and services. Services generate 72.7% of Australia’s GDP. The services that will be required are financial, education, business, transport, health, and government services. Every new government program will require an evaluation.

As a final point, I asked Anona what role the AES should have in ensuring the future of evaluation.

Her response was very much Anona – visionary and straight to the point.

The material for this article is taken from interview questions completed by Anona as well as extracts from her welcome address to the Australian Evaluation Society Conference, Reaching Across Borders Melbourne, 5-9 September 2015.

Tags:
Meet the Fellows
Patricia Rogers, in conversation
Learn from the AES Fellows

The AES Fellows: More than the sum of their individual contributions

Colin Sharp: A long association with the AES

Rick Cummings: Looking back on a career well spent from anthropologist to evaluator

We acknowledge the Australian Aboriginal and Torres Strait Islander peoples of this nation. We acknowledge the Traditional Custodians of the lands in which we conduct our business. We pay our respects to ancestors and Elders, past and present. We are committed to honouring Australian Aboriginal and Torres Strait Islander peoples’ unique cultural and spiritual relationships to the land, waters and seas and their rich contribution to society.